(Rate This Bourbon Yourself!)

For this post, we’ve decided to venture a little outside of the regular bourbon reviews route and into some Rye territory.  If bourbon is the sweet cousin to standard whiskey, then rye whiskey is like its older brother.  While the smooth, succulent tones of corn mash are delightful, a good rye can give you a little more pep in your step. In this case, we’re looking at Bulleit 95 Rye, so named for its incredible 95% rye mash bill content.

If you’re a strict bourbon-only drinker, you’ll notice a sharp difference between this 95 Rye and Bulleit’s standard bourbon, which is 68% corn and only 28% rye.  We’ve done a review of Bulleit Bourbon as well.

BULLEIT HISTORY: A BOURBON THAT WAS ALMOST LOST

Technically speaking, Bulleit bourbon has only been around since 1987. That’s when Tom Bulleit, a former lawyer, decided to take a hard left in his career path and go from practicing the law to distilling the brown stuff. However, it’s not like bourbon wasn’t already in his blood. According to Tom, the first batch of Bulleit bourbon was made in 1830 by his great-great-grandfather Augustus.

Apparently, bourbon was something of a passion for Augustus, who continued to perfect his recipe for 30 years. However, all was almost lost when the master distiller himself vanished without a trace in 1860. Legend has it that he was transporting several barrels from Kentucky to New Orleans when his wagon just disappeared. No one knows what happened to him, but fortunately for Tom, his work didn’t evaporate with the rest of him. We choose to believe that Ole’ Augie decided to leave the life of a distiller and found a spot for him to enjoy his creation for the rest of his days.

In modern times, Bulleit bourbon really hit the mainstream in 1999, when the company was bought out by Seagram. In 2001, conglomerate Diageo bought Seagram, and they’re the current owners of the Bulleit brand. Interestingly, Bulleit is made in the same distillery as Four Roses, which uses a similar mash bill for its small-batch bourbon.

As far as the 95 Rye goes, Bulleit is apparently getting back to its roots. Augustus seemed to like the dry, spicy taste of rye bourbon, as his original blend had over two-thirds of it. This version has been around since 2011, and it comes in regular or 12-year if you’re feeling saucy.

Since its debut, this bourbon has won multiple awards, including gold medals at the San Francisco World Spirits Competition, and high marks from the Beverage Testing Institute and the Spirit Journal. With such a refined pedigree, this bourbon has a lot of hype to live up to.

I had been looking at this bottle for a few days, waiting for the perfect moment to break it open and take a sip. Oddly enough, I’m not being hyperbolic about the “breaking open” part. When twisting the cap off, I managed to split it, rendering it useless. I have been working out lately, but I didn’t think my grip had improved that much. Fortunately, bourbon is always good in a decanter, so all the more reason to use one.

The aroma coming off was sweet and oaky. I could get hints of the spiciness that was to come, along with a few other scents – anise, vanilla, and something else I couldn’t quite figure out. I poured it into the glass and let it breathe for a moment. Not being used to rye bourbon, the first sip was the strongest. If you’re not careful, this whiskey can put some hair on your chest. Thankfully, it mellows out almost immediately, and subsequent sips were much more pleasant. 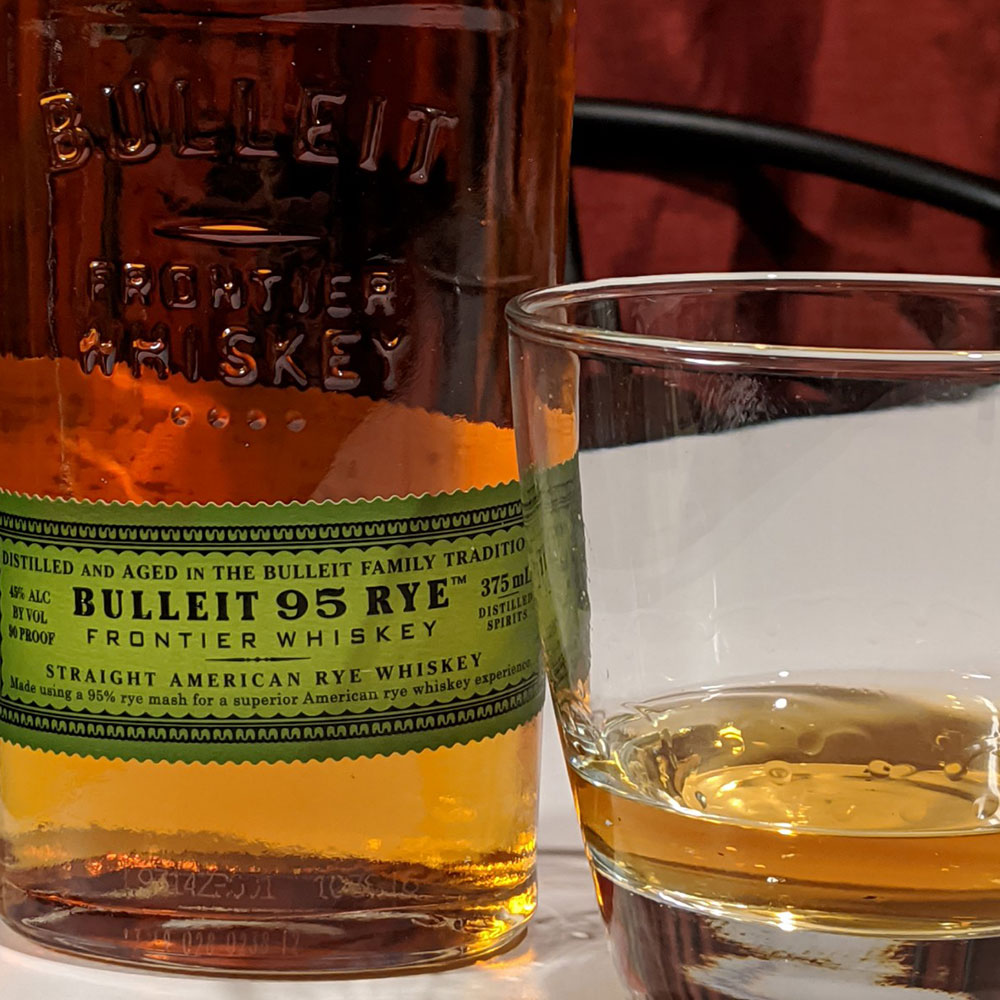 Once the shock of the rye died down, the flavor of this bourbon was rather delightful. The mixture of spices and vanilla were highly present, and they scurried across my tongue playfully, like muses dancing in the moonlight. The finish was also incredibly smooth. Although ryes are not usually as sweet as their corn mash counterparts, this bourbon has a much more mild aftertaste.

Because Bulleit 95 Rye is so mellow, it’s perfect by itself or on the rocks. You don’t need to sully its good flavor profile by mixing it with soda or anything. This is definitely a sipping bourbon – ideal for the end of a long, hard day. This is a drink that’ll first snap you back to reality and then wash away your worries. It’s a whiskey that works for both everyday consumption and celebrations. Fortunately, the price of a bottle won’t set you back too far, so you can add it to your regular stock.

If you’re a fan of Bulleit already, then you’ll appreciate the 95 Rye as well. The company prides itself on already having a high rye content compared to other bourbons, although the difference between this and their standard version is pretty stark.

Because of its rich tapestry of flavor, coupled with its mellow finish, and very affordable bottle price, I’d rate this an A-.  As far as rye whiskeys go, I have to believe this one is spoiling me somewhat.

I can’t imagine that all ryes taste this good, so I’ll have to keep this around for when I find one that really sends a shock to my system.

Tasting this rye also makes me curious about the 12-year variety. If this one is already so smooth, how can more aging help refine its palate? Perhaps another trip to the store is needed to uncover this mystery.

Have you tried Bulleit 95 Rye Whiskey?  If so, what did you think about it? Leave your own rating by using the stars below and click here to leave a comment.