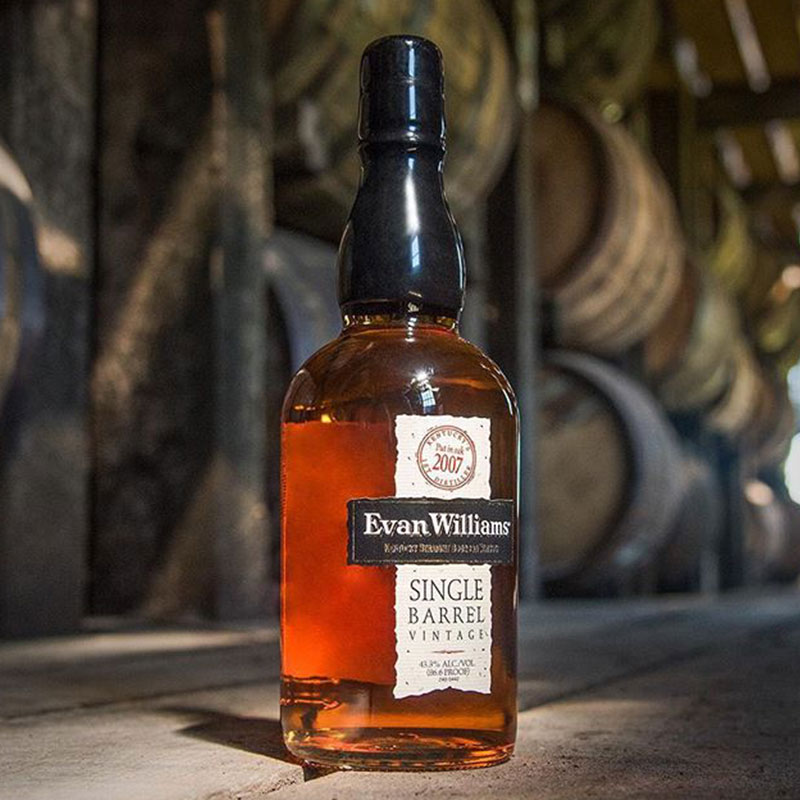 Like most bourbons, Evan Williams Single Barrel carries the namesake of an American great. According to the Bourbon Heritage Center, Evan Williams built one of the first commercial distillery in Kentucky back in 1783 on 5th Street here in Louisville.

Williams  moved to Kentucky from Virginia where he took advantage of our limestone water to produce a bourbon of superior quality. By focusing on quality and strategically positioning himself within the city, Evan Williams  bourbon became a market leader. Ultimately, Evan Williams would become the standard for quality in the bourbon world.

Other sites will refer to Evan Williams as Kentucky’s first distiller, but this was disproven by bourbon historian Mike Veach.

Today, the Evan Williams Brand is owned by Heaven Hill Distilleries –  an outstanding, family-owned operation based in Bardstown, Kentucky. Heaven Hill is the the second-largest holder of bourbon in the world and the largest independent family-owned and operated producer and marketer of distilled spirits in the United States.

Every single Master Distiller at Heaven Hill Distilleries has been a member of the beam family. This has no-doubt attributed to much of the success of the distillery since they got their start in 1935!

So there are several varieties of Evan Williams bourbon on the shelves today. They include:

We will be reviewing all of these soon (because somebody’s gotta do it). But for now, this bourbon review focuses on the vintage single barrel version.

The vintage date is the date the whiskey was put into oak, along with the year it was bottled and the exact serial number of the single barrel that the Bourbon came from. (Fun Fact)

Evan Williams Single Barrel Vintage comes from Heaven Hill’s standard mash bill of 78% Corn, 10% Rye, and 12% Malted Barley. Every vintage is different, so for the purpose of clarification, I am tasting the 2008.

The nose reminds me of 1783 – big and forward right out of the bottle. A pleasant surprise for a bourbon under 90 proof!

Like most of the Heaven Hill bourbons I have tried, the smell of fruit and flowers waft out of the glass. Honeysuckle, white flowers, cherries, and oranges…oh my! There is also a little leather and a nutty, almost granola like aroma that I get after letting the our open up.

The first sip is super smooth. True to its nose, fruit flavors are the first thing that I taste. Berries are far more noticeable, almost like a mixed berry jam even. The malted barley stands out with a white chocolate flavor. The rye is there too, but not in a big way. The texture is velvety in a way that other bourbons with they could be.

The rye doesn’t really stand out for me until the finish, where I get a nice baking spice and caramel flavor. I was just a tad disappointed by the short, light finish and expected something a little more substantial. Within a few seconds I was going for another sip.

Considering the fact that the Evan Williams Single Barrel Vintage price is under $35, this is one those good, cheap bourbons you will want to keep in house.  I give it a solid B.

Find out how we grade bourbon.

Evan Williams has earned its reputation time and time again. Their single barrel vintage doesn’t disappoint, and will give new and old bourbon drinkers alike something to enjoy! If you cant find it in your area (or are lazy like me), you can have it delivered to your doorstep or office.